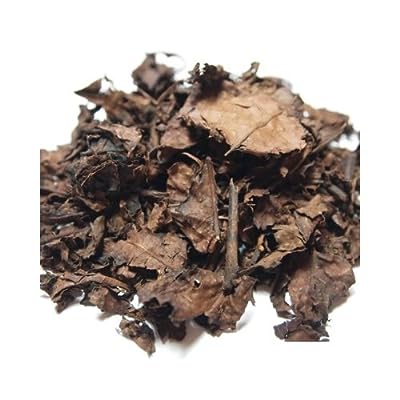 Pu-erh-like tea called Batabatacha from Toyama Prefecture. Batabatacha is a tea that has long been loved by the people in the town of Asahimachi Birudan of Toyama Prefecture. It is a fermented tea quite similar to pu-erh tea. Early August is the harvesting season for tea leaves used in making batabatacha. Tea leaves are steamed in a pan until the color becomes yellowish-brown. Steaming process stops the function of enzymes. After drying the tea for half-day, it is placed in a wooden box for fermentation. The last step is to take the tea out from the box and fully dry it under the sun. In this particular region of Toyama Prefecture, batabatacha is served at various events such as a gathering for ancestor's commemoration or when introducing the bride after the wedding ceremony. As a type of 'tea party' held among family, close relatives and friends, the serving of this tea is ceremonial, but casual at the same time. Brewed tea is poured in a tea bowl to be whisked until it creates a foam. People in the town also drink unwhisked batabatacha with their everyday meal. We haven't tested batabatacha for vitamin B12 ourselves, but this study claims that the tea contains a significant amount: '456 } 39 ng per 100 g dry tea leaves and 2.0 } 0.3 ng per 100 mL of tea drink'. The study conducted testing on rats concluding that 'the vitamin B12 found in the fermented black tea is bioavailable in mammals.'

Wait! We have a something for you...

Don't leave empty-handed! Simply enter your email below and we will send you a great discount on our products:

We hate spam as much as you do! Your details are never shared and you can unsubscribe at any time.